There's an encouraging, though feint, stirring in CAMRA. Wetherspoon did not publish my letter.
I'm inclined to write to Colin Valentine, the CAMRA chairman, put the case, quote the correspondence and ask whether CAMRA might pursue the notion.
at August 04, 2017 No comments:

And another reply in the August edition 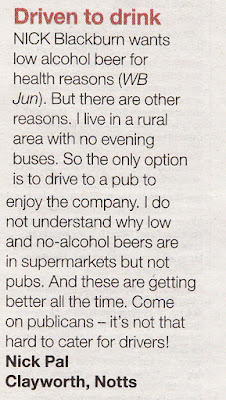 There were three letters in the July 2017 edition of What's Brewing, two supportive and one dismissive. 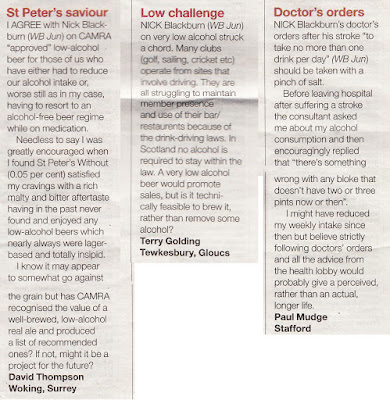 Asda in Bexleyheath is a new source for Nanny State, in elegant 4-packs.
at June 02, 2017 No comments:

My letter (or most of it) was published in this month's What's Brewing. The full version is here. 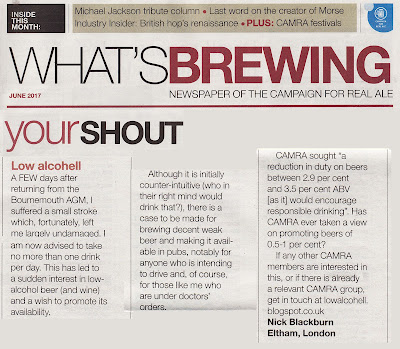 Email ThisBlogThis!Share to TwitterShare to FacebookShare to Pinterest
Labels: CAMRA

A visit to Wales allows a check on Tesco's offering, and it was much better than expected.

Suffolk's St Peter's Without (<0.05%) available at £1.30 for 500ml. On taste, it is ok: not as beer-like or as pleasant as as Nanny State and somewhat reminiscent of that old (not) favourite Kaliber. Most of all, it tastes like a brewery smells.
Lovely bottle.

They also have Eisberg Cab Sav at the same price as Amazon, currently £3.

Email ThisBlogThis!Share to TwitterShare to FacebookShare to Pinterest
Labels: St Peter's Without 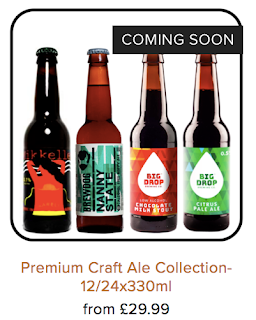 While stocking up on Nanny State at my local Sainsbury's, I got into conversation with a fellow queuer who mentioned the Dry Drinker web site. They even have alcohol free spirits.

At the time of writing, they are promising as "Coming Soon" a collection of Premium Craft Ales, though at a prospective £29.99 for (presumably) the 12 bottle option plus £6.99 delivery charge, that does seem expensive compared to Sainsbury's £1.29 for Nanny State.

Nevertheless, the site might be useful for looking into what is available. There are examples below though, again, the price of the red wine is more than twice what Amazon is charging for Eisberg. 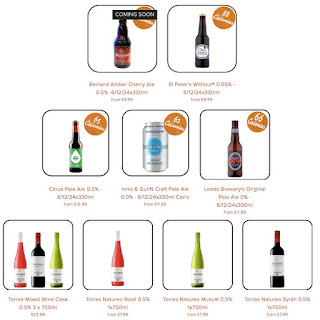 To the editor, Wetherspoon News, editor@jdwetherspoon.co.uk

After a recent minor stroke, the medical advice is to limit my intake to one drink per day. This has prompted an immediate interest in low alcohol beer (and wine). From my new perspective, I can see the logic of pubs stocking decent beers under 1% alcohol as there is a likely market amongst designated drivers, the health-conscious and those, like me, who still enjoy visiting a pub, but cannot drink ‘proper’ beer.
While current demand would not justify supplying low alcohol beer on tap, could I request that you look into bottled beers? My local Wetherspoon in Sidcup only stocks Erdinger AlkoholFrei which is awful. You already sell bottles of various BrewDog lines and their 0.5% Nanny State is pleasantly close to the real thing.
If you need a volunteer for your tasting panel, I’ll be happy to help and start a new trend.

Published in the June edition.

A few days after returning from the Bournemouth AGM, I suffered a small stroke which, fortunately, left me largely undamaged, but I am now advised to take no more than one drink per day. This has led to a sudden interest in low alcohol beer (and wine) and a wish to promote its availability.
Although it is initially counter-intuitive (who in their right mind would drink that?), there is a case to be made for brewing decent weak beer and making it available in pubs, notably for anyone who is intending to drive and of course for those like me who are under doctors’ orders.

A 2015 Telegraph article (http://bit.ly/2oukH8g) notes that “under current advertising rules, brewers can not positively promote lower strength drinks, between 1 and 3.5 per cent, as these products are not yet legally defined", though from the Advertising Standards Authority Non-broadcast Code, “Alcoholic drinks are defined as drinks containing at least 0.5% alcohol; for the purposes of this Code low-alcohol drinks are defined as drinks containing between 0.5% and 1.2% alcohol” (http://bit.ly/2pmfJhT). HMRC states, “Beer Duty is chargeable on … beer if [its] strength is more than 1.2% alcohol by volume” (http://bit.ly/2oRJk1e).

A CAMRA press release dated 24th November 2016 sought “a reduction in duty on beers between 2.9 per cent and 3.5 per cent ABV [as it] would encourage responsible drinking”. The weakest beer available at the AGM was Dancing Man’s Bone Dry at 3.4%, one of 16 session beers in the 3% range. Has CAMRA ever taken a view on promoting beers of 0.5% to 1%?

While waiting for the real (low alcohol) ale revolution to arrive (CAMRAla?), I have been looking at the bottled beers which I hope pubs will stock more regularly. Brew Dog’s cunningly named Nanny State at 0.5% provides an excellent, hop-heavy benchmark and is intermittently available at some supermarkets but not at my local Wetherspoon. At the other end of the spectrum is Erdinger AlkoholFrei, an entirely unpleasant substance which Wetherspoon does stock.

If any other CAMRA members are interested in this subject, or if there is already a relevant CAMRA group, please get in touch at http://lowalcohell.blogspot.co.uk/

Finally, there is an interesting and wide-ranging piece on small beer on the Anchor Brewing blog, http://bit.ly/2ocdtcS.
at April 21, 2017 2 comments:

Email ThisBlogThis!Share to TwitterShare to FacebookShare to Pinterest
Labels: CAMRA

Anchor Brewing of San Fransisco has posted an extensive piece on small beer, noting
"The tradition of brewing two distinct beers from one mash is an ancient one [we] assayed to explain on our neck label—and for centuries the term ‘small beer’ was used in English to describe the weaker second beer.”

Sainsburys Eltham sell Brew Dog Nanny State for £1.25 per bottle. I have bought all their stock.

Update, 30th April
I have now exhausted M&S's supply of Southwold.
No sign of the Pilsner.
at April 21, 2017 No comments: